If it hadn’t been for the news article, I might never have heard of Sugar Lake.  You see those articles two or three times per year – how weekend warriors from the province next door come in, trash the place, and leave without so much as returning their empties.  The article was recent, and had it not been for the fact that we drove past Cherryvale on our way to the Kootenays, it probably wouldn’t have registered with me at all.  But Cherryvale, or what you can see of it from the highway, it a lovely area.  While we were passing through, I noted the fact that I’d like to come back to do a little exploring.  Sugar Lake fit the bill. I just didn’t expect to do it so soon.

It’s been a pretty strange year for all of us.  We’re struggling to defend our homes from a global pandemic while at the same time conduct business as usual.  For many of us, myself included, our reaction to the events of the world around us has not been what we expected.  I thought I was stronger.  Even when opportunity has presented itself for me to get out and explore, my natural inclination has been to hide.  Covid-fatigue has set in.  We’re all going to die anyway, right?  What’s the point?

I found myself with an unexpected week off.  My heart was failing again.  I decided a couple of days off were in order.  Because suddenly, there was a point.  I am just not freakin’ ready to die yet.  For six days, I didn’t leave the house at all.  I ate when I was hungry, trying to keep it healthy, slept when I was tired, and didn’t exert myself in any way.  On the seventh day, there was Bear.

I had to pick up a prescription and stop at the lab, so I was going to have to leave the house anyway.  Why not?

Still, by the time those errands were done and we’d purchased some (healthy) snacks for the road, it was almost 3:30 in the afternoon.

“Are you sure you still want to go?  It’s getting late.”

Bear, who had been to two supermarkets trying to find “healthy” was beyond frustrated.  “If you tell me you’ve changed your mind now, I might have to cry,” he said.

Laughing, I agreed to continue.

It was, in fact, a great day for a drive.  The A/C hummed softly.  Music flowed from the Bluetooth, and there was little traffic.  Better than all of that, was the fact that Bear wanted to talk.

Anyone who’s ever parented a teenager knows that if your teenager/twenty-something child suddenly says they want to talk, the only thing to do is shut up and listen.  It’s not something that happens every day.

Between the joyful conversation and the steadily greener landscape, the miles flew by and before we knew it, we were on the turn off to Sugar Lake.  Our pace slowed from here, and we were happy to take our time.  There were plenty of places to stop.

One never knows what you might find in the woods.

There were forestry roads calling me and I had to rein myself in.  Not enough time today. 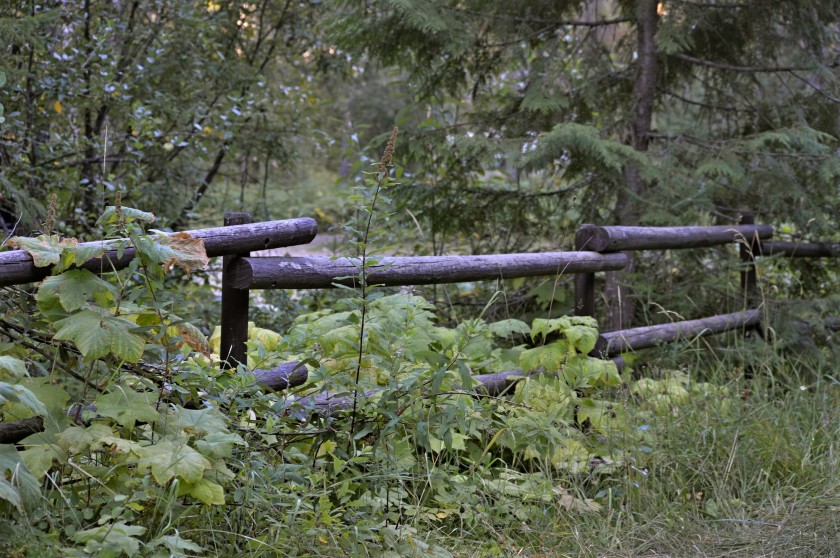 The rec sites at Sugar Lake are spectacular, located right on the beach with a fire pit and a picnic table, surrounded by forest and obviously well maintained.  You could see the rake marks around the picnic table where food scraps, bottle caps, or cigarette butts had been cleared away.

Bear wanted to know if I still had some camping left in me.  I think I do.  And now I know where we’ll go.

We got back on the road shortly before sunset and had to pull over to fully appreciate the clouds and the way the colours were reflected on the railroad tracks.

We pulled into Vernon just before 9:00 pm and found our way to Intermezzo Restaurant where we had a fabulous dinner.  After that, there was nothing to do but head home.  Or so I thought.

I found myself turning off at Oyama.  The full moon cast a silver path across the lake.  There was a floating dock not too far from shore.  Bear got it in his head that he wanted to swim out to the dock.  I made my way to the beach, worried that I wouldn’t be able to reach him if he got in trouble.  I should have gone in.  If my heart were to fail completely, if I were to die tomorrow, I would die with that one thought – I should have gone for that moonlight swim.