This is not a post about going for a drive.  This is a post about staying put.  Granted, we went for a drive to reach our staying put place, but once we were there, that was it.  Kind of.  Let me try again.  Maybe I can clear this up.

It’s been a tough year for everyone.  Covid-19 has taken its toll on all of us, in one way or another.  I’ve been lucky in that my friends and family have so far been spared.  May that continue to be the case.  My son was laid off but qualified for benefits, and I continued working.  With the addition of a timely bonus and some hard-core saving, I was finally able to replace the old car.  I drove the new one in the city and took it out on the highway one night at 2:00 am. (Santana and I drove to Winfield for hot dogs and lime Jarritos and no, I don’t know why.) But we still hadn’t tested it out on the back roads.

Santana was bound to be called back to work soon.  Once that happened, our days off were rarely in sync, and taking a holiday this year might just be a pipe dream.  It was almost my birthday.  I wanted to have an adventure, damn it!  I booked a cabin at Postill Lake for two nights.

For me, this was a challenge in being unplugged.  Like a lot of people, I’d been drowning in news reports and social media, trying to keep up with what was going on in the world and helpless to do anything meaningful.  I needed it to stop for a minute or two.  I needed to be unplugged.

We arrived at Postill Lake on a sunny Thursday afternoon.  My cell phone went into my purse and I was determined it would stay there.  I asked Santana to check the temperature of the lake.  He immediately changed into his good, old-fashioned gum boots and waded in.  This is the look he gave me when I asked if he had any keys in his pockets. Not impressed.

How peaceful it was to just sit and look out at the lake!  It was like someone turned down the noise in my head and for the first time in a long time, I was able to just BE.

Postill Lake Resort is charming and delightful, and no matter where you look, there’s something to see.

Evening found us on the porch of our cabin, listening to the loons calling, and later the frogs singing.  In between we played board games.

Finally, it was bedtime.  There was a bedroom with a queen size bed, and a pull-out couch with a double hide-a-bed.  I’d already claimed the bedroom.

Santana fought his way free.  He took a deep breath.  He set up the bed.  He laid out his bedding.  He very gingerly climbed in.  He very gingerly wiggled.  So far, so good.  He looked at me, still trying to contain my laughter.  “Goodnight,” he snapped.

Morning dawned brightly.  I don’t know about Santana, but I had an awesome night’s sleep.  Him, maybe not so much.

We decided to rent an electric fishing boat, just to go out for a cruise.  Santana was going to be driving, so I had to sit at the front of the boat, for even weight distribution.  There was no room for my legs up there, so I sat backwards which made it a little awkward for taking pictures.

We followed the shoreline, slowly putting along.  I had hoped to see some birds on the lake, but other than one diving loon, there were no water birds to be seen.  We did come across a frog as he swam along, and although I tried, I couldn’t get a clear shot of him.  We came around a bend in the shoreline and discovered a whole other bay we hadn’t know was there.

By this time, I was starting to cramp up.  I’ve had issues with my legs for a while, but in the last month or so, my condition has deteriorated a great deal.  I told Santana we’d have to head back to the lodge.  Although he amped it up a bit, the ride back to the lodge took some time and by the time we docked, the pain was nothing short of excruciating.  Now came the big question.  How the f*&% was I going to get out of this boat?

Yup, I managed to get one leg out and then I ROLLED onto the dock.  Not my finest moment.

Once I’d gotten to my feet in a complicated reverse downward dog move, I was good to go.  Funny, I care way less about being graceful anymore.  I’m happy if I can get from A to B, regardless of how it’s done.

After a quick lunch, Santana took off to hike to another nearby lake.  I parked myself at the picnic table and spent the afternoon writing.  Could it get any better than this? 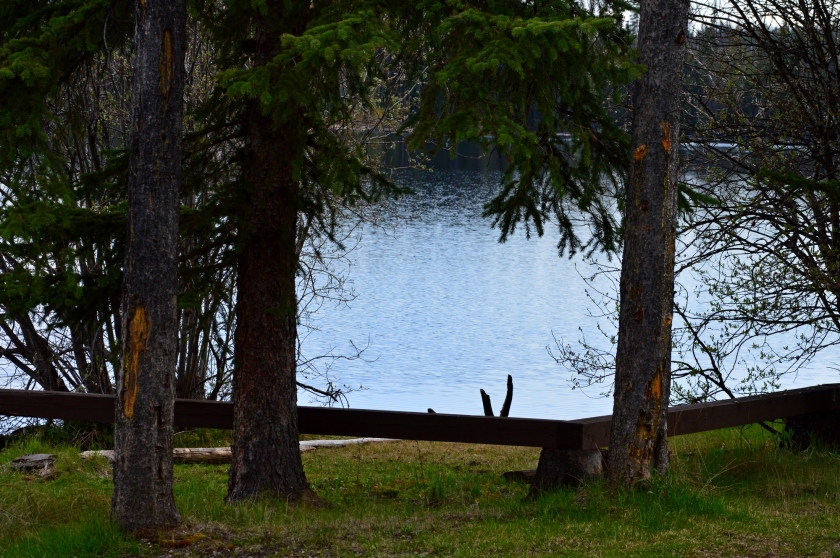 Evening was much the same as our first night, but with no clouds in the sky, the colors were more brilliant than before, and the fishermen stayed out longer.

Eventually, they all come home and night falls.

We came home early.  Santana had issues with his bed, so he got up and started the packing and housekeeping.  By the time I got up at 7:30, he was pretty much ready to go.  Morning was absolutely brilliant on the road back down to the city.  We came across deer, turkey vultures, and marmots.  The sun sparkled in the trees.  There was music playing, birds were singing. I hadn’t used my phone at all and I was still alive.  So now I knew for sure that it wouldn’t kill me to not check it every ten minutes.  I hope I can remember that. 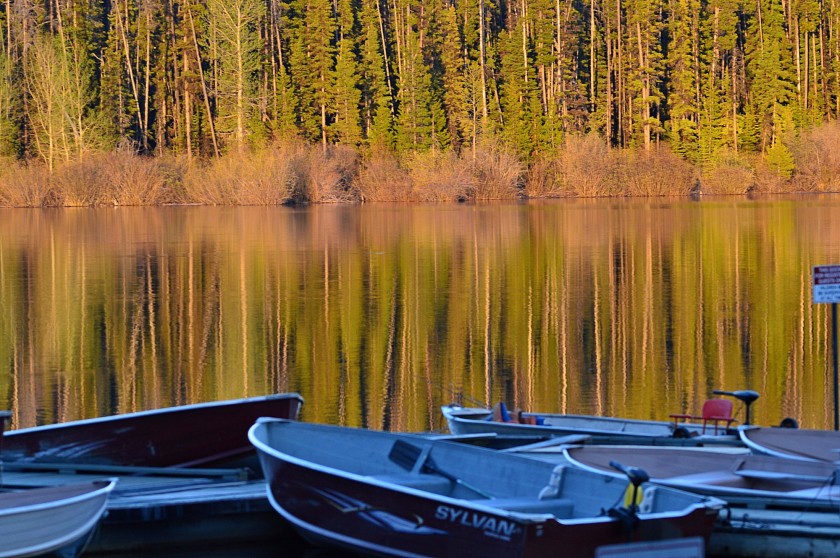 Sally Quon is a photographer and writer living in the beautiful Okanagan Valley. When not out enjoying the splendors of nature, she likes to spend time cooking, reading and painting. Her photography has appeared in Canadian Geographic Magazine and in Nature Alberta’s various birding brochures. Sally was recently awarded a Judge’s Choice Award in the Ontario Poetry Society’s Ultra Short Poem Competition and has an essay coming out in Chicken Soup for the Soul - The Forgiveness Fix. One of her photos was chosen for inclusion in the Photographer’s Forum “Best of 2018” Collection. She has two beautiful, almost grown children. View all posts by Featherstone Creative

7 thoughts on “On Being”