I’m not the healthiest person in the world. In fact, I’m probably about as unhealthy as a person can get and still be above ground. I’m in this Catch-22 of needing to lose weight and having very limited mobility due to my weight. One of the reasons I wanted to do this blog on a weekly basis is that it keeps me active but doesn’t really feel like exercise. Most of the time.

I was feeling particularly lazy this week, having given up my one day off to cover the holiday for a coworker. I had no direction, no motivation.

“Got any plans today?”

“No. We should do something.”

“Well, I was thinking about going for a drive…”

After a bit of discussion, we decided on a direction – South to Penticton.

There was a park in Naramata that I wanted to go to and neither of us has seen Skaha Bluffs. With those two possible destinations in mind, we set out.

I turned to Santana.

I love Mountain Goats. Last summer we’d gone camping in Keremeos, a small village near the US border, with the express intent of finding the local herd. Two days of driving up and down the highway and we never did see them. I’d heard that some had been spotted near Summerland a few weeks back, so as unlikely as it was, someone had to be the lookout.

But alas, we reached Penticton without seeing any goats along the way.

We found our way to the imaginatively named “Creek Park” in Naramata. Somewhere along this creek was a waterfall. I just hoped it wasn’t too far in.

Not the Waterfall at Creek Park, Naramata

The forest was full of dappled sunlight, wildflowers and butterflies chasing each other on the breeze. Birdsong filled the air.

I had to watch my footing as exposed rocks and roots made the narrow dirt trail slightly treacherous. Signs along the trail warned of the presence of poison ivy.

We’d travelled some distance (for me) and had stopped at a bench to rest. Santana thought we should turn back. He was concerned that if we went much further, I wouldn’t be able to make it back. I was inclined to agree with him.

From around the corner came a dog, followed by his owner. The man was excited.

“Look what I found!” He held out his phone so we could see the video he took of a snake sunning himself on a rock.

“A Rattlesnake. The sign said there were some around.”

I hadn’t seen that sign. I was surprised. I thought Rattlers liked desert and grassland. I wouldn’t have thought to find one in a riparian forest.

“You know I’m not going back now,” I said to Santana. He sighed and nodded. He’s been down this road before.

Although we looked, we didn’t find the snake. We asked others on the trail, but no one else had seen it.

“How much further are we going to go?” Santana asked.

“Excuse me.” There were people passing by. “How far away are the falls?”

“About a half hour walk, but totally worth it.”

Santana and I had just crossed our third bridge. The path ahead wound up at an angle steeper than we’d seen thus far.

There was no way. Reluctantly, we turned back.

I was already in trouble. There was a numbness and tingling in my feet that made it hard for me to tell if I was lifting them high enough to get over the roots. I was stumbling. My legs were on fire and I had to use my hips in exaggerated motion just to move them. The effort was making me sweat, in spite of the relative coolness of the day. Santana tried to support me but the trail was too narrow for us to walk side by side.

“Just give me a sec.” I was gasping for air. There was no where to sit, but I had to stop for a minute.

Then we heard it.

I don’t know if it was a rattle or a hiss, but we both heard it and froze.

There, right on the edge of the trail, was the snake. Santana and I both took a step back.

My hands were shaking with a combination of excitement and exhaustion as I fumbled with my camera, focused and began to shoot. There was a leafy tendril of some plant partially obscuring my view and I desperately wanted to reach out and pinch it away. I resisted the urge. I don’t want to be one of those people who fall off a cliff and die while trying to take a selfie. The same principles apply to photographing snakes. Or so I assume. This was my first snake.

Maybe it was the adrenaline of the snake encounter that enabled me to make it back to the parking lot – I don’t know. But I made it. I was completely spent and knew I’d have to cancel my plans to do the Open Mic at the Marmalade Cat Cafe. And the Bluffs? Those were going to have to wait for another day. This day was done. 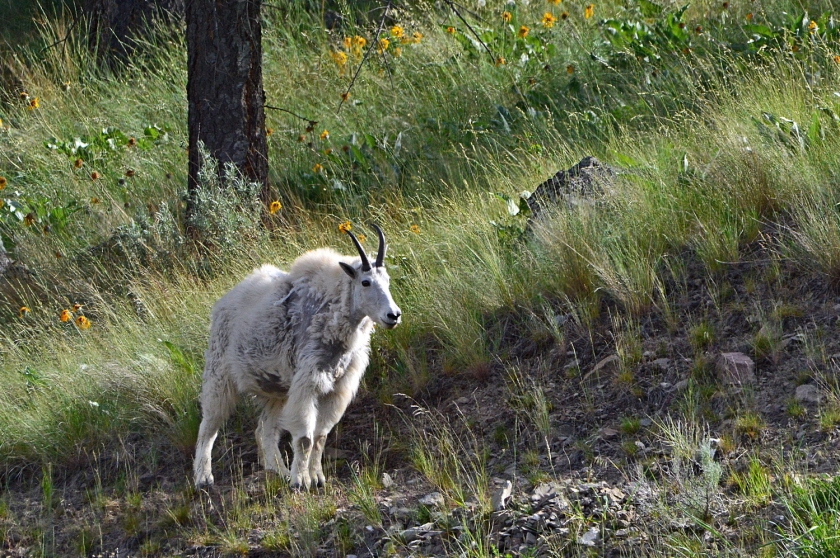