The day was young, the sun was shining, a picnic lunch was packed and ready to go – all I needed was my son to haul his butt out of bed and we could be on our way. I was delighted to find that he had a day off and no plans.  There are a few places on my list that Santana wanted to see – slightly longer trips – and this day was absolutely made for one of them.

A few months ago, there was a local news article about a near-forgotten resort, high in the mountains, that was being overhauled and brought back to life.  The Chute Lake Lodge is located just outside of the Okanagan Mountain Provincial Park, North of Naramata.  The new owners of the lodge spoke of their plans to use the resort for corporate events, yoga classes, writer’s retreats, etc.  Some of my writer friends from the South Okanagan took a trip up a few weeks ago to scope it out.  The report they brought back was encouraging.  I asked one of them about the road.  She shrugged and said that it was rough but do-able.  I couldn’t wait to see the lodge for myself and Santana was anxious to see Naramata.  That was the plan – but there was more.

Back in the summer, before I’d ever heard about the Chute Lake Lodge, I had asked a long-time resident if there was another way to get to Penticton from Kelowna.  He said there was, but the road wasn’t easy to find, and not for the faint of heart.

Naturally, that’s the way I wanted to go.

The journey began on the Gillard-Forestry road that I travelled last week, which looks entirely different in the bright sunshine.  It turns out that the place I thought was the top was not the end of the road after all.  I hadn’t seen past the logging equipment parked there to the continuation of the road beyond.  The mud was all dried up and we sailed on.

We also didn’t have any trouble finding the turn-off, thanks to a weather beaten, hand-made sign that said “Penticton” with an arrow pointing the way. 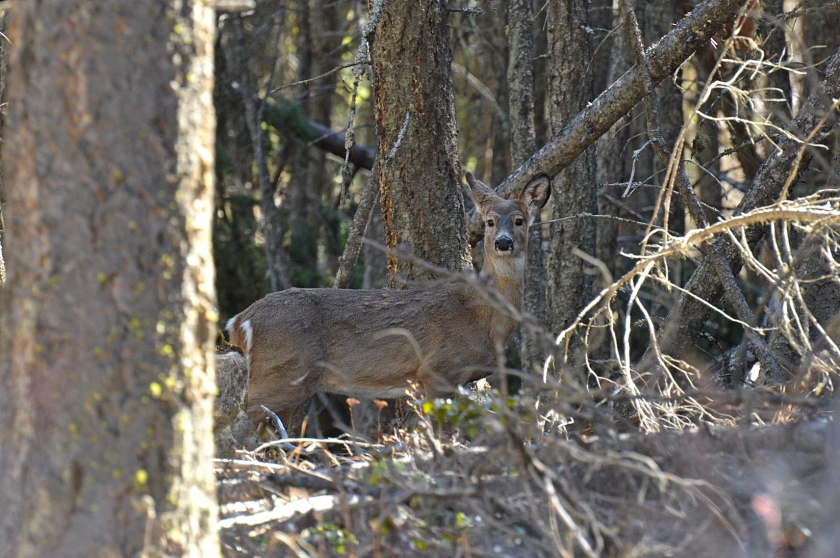 “If this road gets too rough, we’re going to have to turn back.”  I didn’t know what lay ahead.  The “Drive BC” app on my phone doesn’t exactly cover road conditions in places like this.  We drove slowly, avoiding the potholes, ruts and sharp rocks along the way.  But the drive, even at 25 km/hr was fabulous.  The road continued to climb and every so often, through the trees, we would catch a glimpse of the city below and the valley beyond.

Chute Lake Road, from the Kelowna side

“It’s not too deep,” Santana said, after having a look. “I think we can make it.”

I hugged the side of the road as much as was possible. My hands gripped the steering wheel while I muttered pleas to whichever deities might be listening.  I should have known there’d be water.  Just last week there were snowfall warnings issued for the higher elevations.  That on top of the rain, the existing snowpack and the warmer weather of springtime pretty much guaranteed that there was going to be some run-off.

Gotta say, though, I’m proud of my little Kia.  She soldiered right through those puddles without hesitation.  “Thank God that’s over,” I thought.  But was it?

There was water everywhere.

Water pouring off the rocks, Chute Lake Road, Kelowna side

That section of flooded road was only the first of many along the way.  Each time, we discussed whether we should turn around.  Each time we went forward and each time we made it.  Then we came to a section that was so deep that water started to seep in under the door.  At this point there was no way back.  I had no choice but to go forward.  I heard something scrape the bottom of the mini-van and I cringed.  I stepped on the gas.  The mini-van lurched forward and my tires found some solid gravel, pulling us forward and on to dry ground.  I turned off the engine and breathed.

We got out and waited for the water to finish draining out of the vehicle.  Then we checked for leaks, fortunately finding none.  We could only go on from here, because there was no freakin’ way I was going back through that. 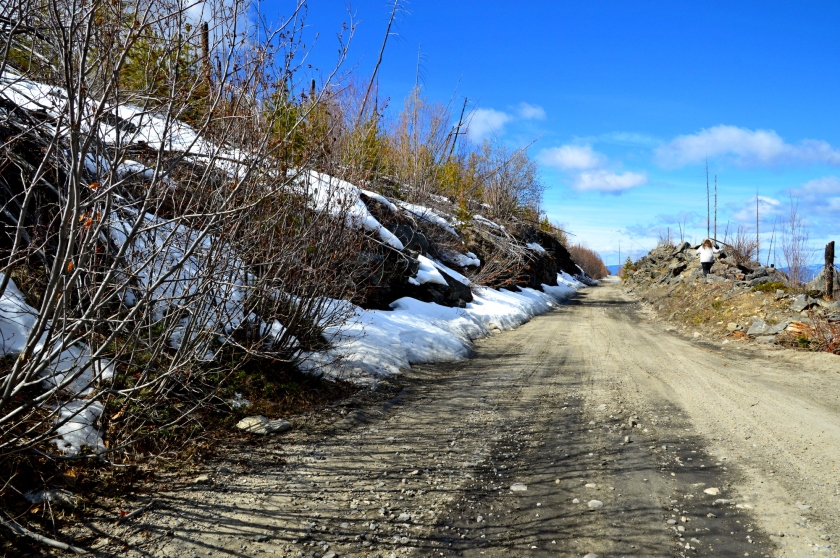 The rest of the road, while rough, seemed a breeze after the white-knuckle experience we had just survived. Admittedly, there were times that the road seemed little more than a narrow gravel causeway built up through a valley, with steep drop-offs on either side.  I had to stop, at least twice, for waves of vertigo to pass. Eventually, we began to descend, and the road became friendlier, with forest and marshland on either side.  The air was full of Mourning Cloak and Angelwing butterflies. 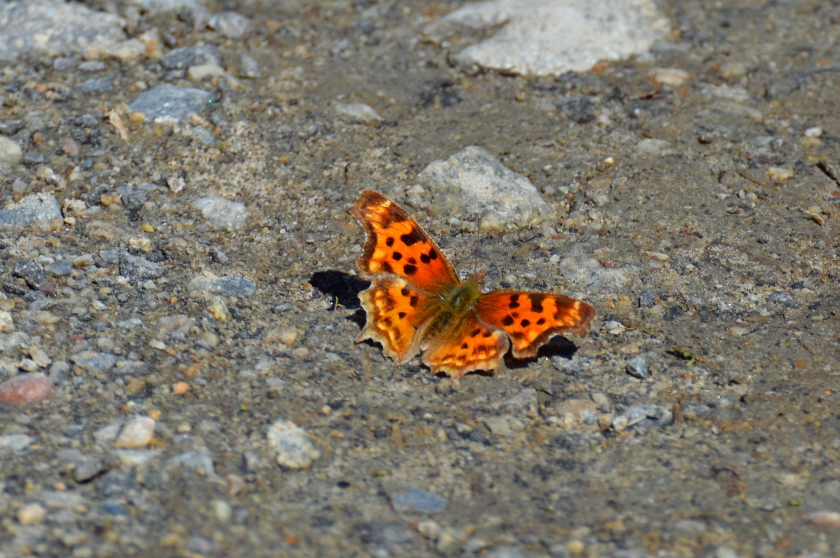 It was 1:00 pm when we finally arrived at Chute Lake.  We’d been on the road for three and a half hours.

There was a cold wind blowing, and waves were breaking on the ice still built up along the far shore.  But the sunlight sparkled on the sapphire blue water, and the air was crisp and clean.  It was a truly lovely sight, and obviously well-loved, judging by the memorial plaques that were mounted on a large boulder at the side of the lake.

The lodge at Chute Lake was, unfortunately, closed for the day.  Electricians were busy getting things in order.  We did have the opportunity to speak with the manager, who was outside with her children cleaning up the grounds.

“You came from Kelowna?” She laughed.  “How was the road?”

“You’re adventurous, I’ll give you that.”

I’m not sure adventurous was the right word.  Had we lived in the area longer we probably would have known not to even attempt that road for another few months.  Here we were, nonetheless.

The road into Naramata is a sharp decline, still gravel, still rutted, but nowhere near as rough as the way we came in.  I was almost disappointed when we had pavement and a yellow line a mere fifteen minutes after leaving the lodge. 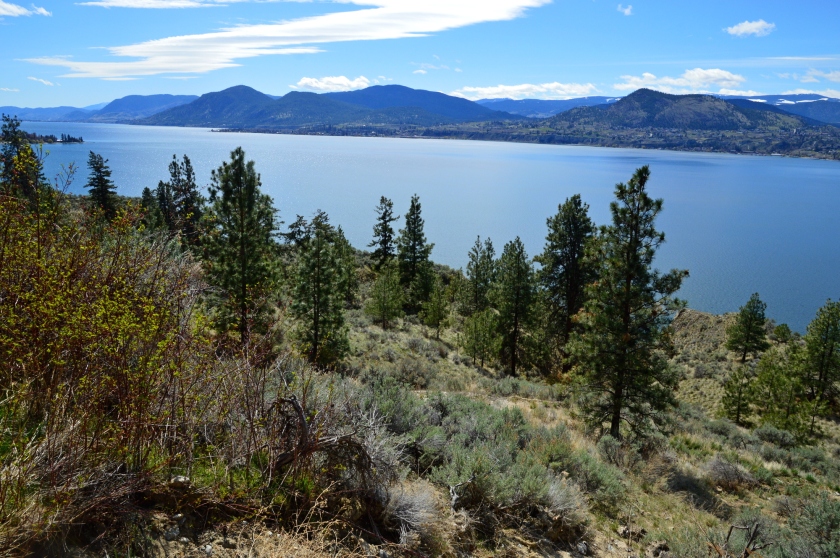 We took the highway back home.

I’m sure I will return to the Chute Lake Lodge one day soon.  If I had the sense God gave a gopher, I’d take the route up through Naramata.

But it wouldn’t be nearly as much fun.